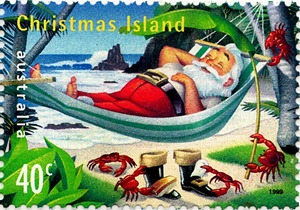 The 40 c stamp shown Santa Claus has taken rest   for his journey during the Christmas time on the beach shore . 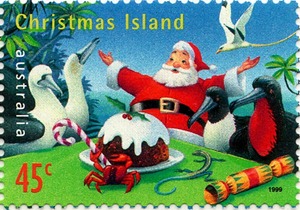 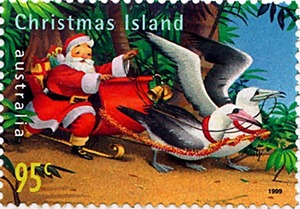 The 90 c shown  Santa Claus ready to go around the world. His journey  is not usually , is not  used deer but used  the  native bird from Christmas Island.

Posted by Color of Stamp at 9:25 PM No comments: 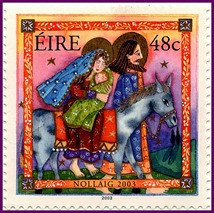 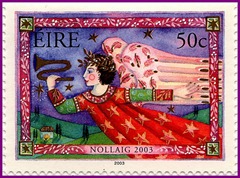 The 50 c stamp depicted an angel of the Lord visits the shepherds and brings them "good news of great joy": "to you is born this day in the city of David a Saviour, who is the Messiah, the Lord." The angel tells them they will find a child wrapped in bands of cloth and lying in a manger. 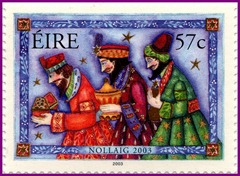 The 57 c stamp depicted the Magi travel to Bethlehem, the star "goes before" them and leads them to a house where they find and adore Jesus. They present Jesus with gifts of gold, frankincense, and myrrh, in Matthew 2:9-11

Posted by Color of Stamp at 7:09 AM No comments: 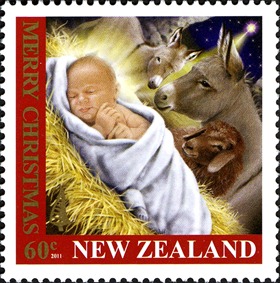 Christians celebrate Christmas in various ways.  In some Christian denominations, children re-enact the events of the Nativity with animals to portray the event with more realism or sing carols that reference the event.

The 60 c stamp represents “the baby Jesus wrapped by Virgin Mary in swaddling clothes and laid him in a manger, because there was no room for them in the inn”. 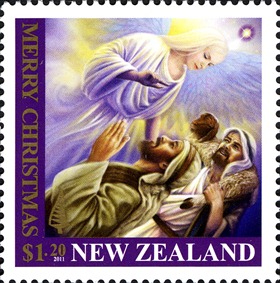 As the new day began, suddenly an angel appeared  and the glory of God shone around them. The shepherds were very, very scared, but the angel said, 'Don't be afraid. I have good news for you and everyone. Today in Bethlehem a Saviour has been born for you. You will find the baby lying in a manger.'

Then many more angels appeared, lighting up the sky. The shepherds heard them praising God singing: 'Glory to God in highest, and peace to everyone on earth.' When the angels had gone the shepherds said to one another, 'Let's go to Bethlehem to see what has happened.'
Read more »
Posted by Color of Stamp at 8:08 AM No comments: 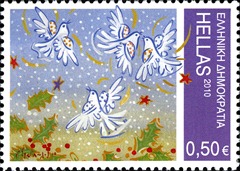 Nature also was rejoiced to welcome the Savior of the world. The birds are singing in the Christmas mood cheerful. 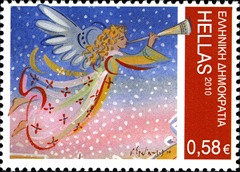 The angels sang hymns of praise invites mankind to come together to sing "Gloria in Excelcis Deo". 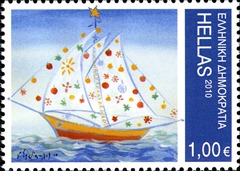 The joy of Christmas with family, friends is an unforgettable memories. Sailing trip is also one event where we can celebrate Christmas excitement. “Sea Christmas” 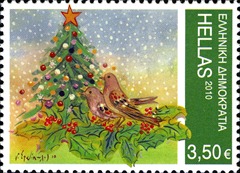 Now the pine tree is not decorated with candlelight flickering but with fairy lights and Christmas decorations such as fairies, stars, bells and other Christmas ornaments. With the Christmas tree, joy to welcome the birth of the Savior  more lively

Posted by Color of Stamp at 6:54 AM No comments:

Posted by Color of Stamp at 6:21 AM No comments:

Joy to The World on Fiji’s stamp 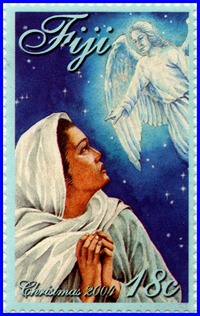 All over the world is celebrated this holiday season with feasting and gift giving. The Christmas Story is captured on the four stamps which issued  by Fiji Post on the 1st December 2004.

The 18 c stamp represent  Virgin Mary, looks serene yet concerned as she receives the news that she is to be the Mother of the Messiah. The angel Gabriel announces to her that her child will be the Son of God. 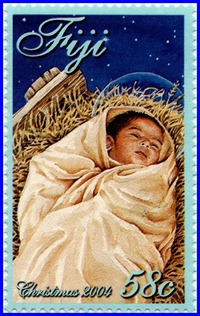 The waiting is over and Jesus is born, wrapped in swaddling cloths and laid in a manger. This takes place in the city of Bethlehem, King David’s city. This holy child is laid on straw meant for animals, as there is no room at the  Inn.

Read more »
Posted by Color of Stamp at 5:51 AM No comments: 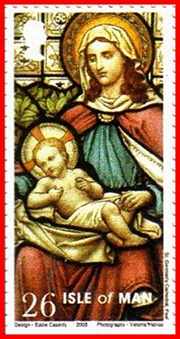 Isles of Man Post pleased to release a special issue of stamps for celebrating  Christmas 2005 which feature stunning examples of stained glass windows from Churches on the Island. The five stamps  have issued on November 7, 2005.

The 26 p stamp present Mother and Child, Mary and Jesus. A detail from the window at the West end of the south aisle at St. German’s Cathedral, Peel. 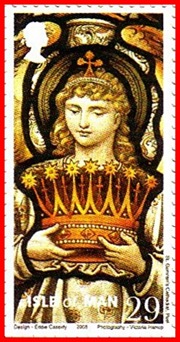 The 29p stamp present Angel with the Crown of Glory. A detail from St. German’s Cathedral, Peel.The church used pictures to great effect for bible and morality stories. Stain glass continued, and even increased, in favour as wall painting diminished. 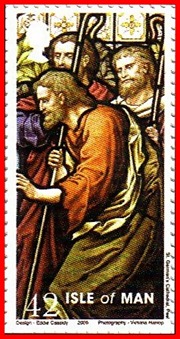 The 42 p stamp present  Shepherds come to warship the Christ Child. A further detail from the same window at  Peel, St German’s is unusual in having two windows side by side at the west end both depicting the Nativity. The larger nave window replaced  a different one blown out in great storm of 1903.

Read more »
Posted by Color of Stamp at 6:27 AM No comments: 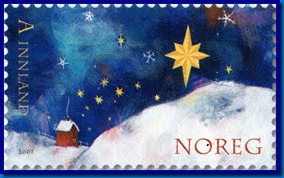 On November 23, 2007, Norway Post released the wonderful Christmas stamps. The issue comprised of two single stamps  depict the illustration of the Christmas Nativity. 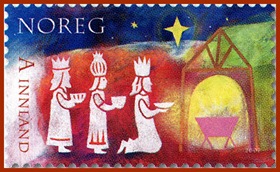 One  stamp shows a Christmas Night with the Star of Bethlehem in the sky. and the other  shows the Three Wise Men in front of the Baby Jesus.

Posted by Color of Stamp at 8:19 AM No comments:

Australia Post  have issued  a set of five stamps to celebrate Christmas Season 2012.

The traditional Christmas story is presented in two of the five stamps from this year's Christmas stamp issue. The rest stamps depict the illustration related to the Christmas theme.

These religious stamps are based on the Adoration of the Magi, a wool and silk tapestry in the Art Gallery of South Australia.

The tapestry shows three richly garbed magi, or kings, offering their gifts of myrrh, frankincense and gold to the Christ child. Matthew's gospel tells how the magi traveled afar from the east, and their origin is suggested by their turbans and embroidered clothing as well as by the dark skin colour of one of the kings.

The Virgin and Child are seated on a mound of hay within the manger (55c), while Joseph, pausing from his labour of wood chopping, witnesses the reverential scene.

An attendant angel appears in the background, with the illuminating star held in his hands. All around there is a profusion of flowers, including the lily, rose, iris, periwinkle,pansy and snowdrop, which are all acknowledged as symbols of the Virgin.

The other stamps in the issue are non-religious. The brightly coloured, celebratory subjects are suggestive of familiar Christmas carols "Rudolph the Red-Nosed Reindeer", "It's beginning to look a lot like Christmas", "Jingle Bells" and "Ding Dong Merrily on High". The style is deliberately naïve, intended to recall a child's delight at Christmas time.

Read more »
Posted by Color of Stamp at 7:45 AM No comments: